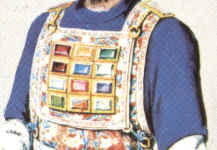 The oldest documented diamond in the world is the one in the priestly breastplate – the Hoshen – that was used by Israelite priests in the temple of the one god in Jerusalem, for many centuries until its destruction by the romans. The Hoshen was a sacred artifact that was used for divination and enacting judgment in the name of the one god.

The Hoshen was a large piece embroidered linen that held 12 precious stones, each one standing for one of the old israelite tribes – the name of each tribe was carved on the corresponding stone. And while some scholars dispute that the jewel that stood for tribe Zebulon was indeed a diamond (due to their misunderstanding of how a diamond could even be cut at that period), the bible tells us that it was so, and to remove the Scholars’ doubts the Talmud explains exactly how Moses was able to actually cut it.

The Hoshen was used in conjunction with the Urim & Thummim, artifacts of unknown power, origin or look to render judgment or summon divine counsel.